Hi everyone, I have put a new post up on the official site. See it here.

This will be my last post on the WordPress site, so please make sure you follow me on the new site if you aren’t already.

Here is the link to the newest post on the official site. I will be posting one or two more links on the wordpress site and then I will be officially switched. Thanks for reading and please follow me over on the new site!

Here is the link to today’s post on the new site.

I will only be posting a few more links on the wordpress site and then will be completely switched over the NeatenYourNest.com. Please follow me over there at the new site by email or on Facebook, Twitter, or Bloglovin!

So the blog transfer continues……I finally figured out how to transfer the site. I won’t be doing any tutorials because honestly, it was a mish-mash of late nights, frustration and phone calls to WordPress, Go Daddy and now a site designer to help me figure out the things I couldn’t do myself. The switch actually brought on a few tears and quite frankly, I have no idea what steps I actually took to get it the point I’m at now. Anyways……

I have finally gotten my social media buttons under control and have just started posting on the new site. For this month, I will also post the link here to facilitate any of my subscribers in finding the new site. Here’s today’s post:

Hi everyone! I truly have no idea how to see my followers with my new self hosted WordPress site, but I’m workin’ on it. Here’s my first step in getting my followers to stay with me though: Bloglovin

If you currently follow me on Bloglovin, the original followed site will not continue to work after I complete my transition. Please go to Bloglovin and type in neatenyournest.com to get to the correct feed.

Here is the link to my appearance on Fox News ‘Foxy Moms’ segment in Colorado Springs yesterday morning. Just click on the picture! 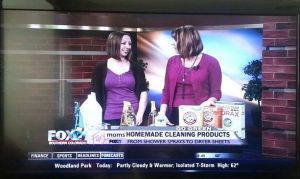 My hands were shaking I was so nervous! It was a great experience though and I’m so glad I got the chance!

Hi everyone! I have completed my transfer over to self hosted on WordPress.org. I’m still figuring out the social media side of it, getting my ‘follow’ buttons up, etc so for a few weeks I will double post on both that site and this one. However, please know that soon I will be fully switched over to the new site. Here’s the current news for Neaten Your Nest:

Today I had the amazing experience of being on a guest segment on our local Fox News station in Colorado Springs. I discussed several different ‘green’ cleaning products that you can make at home. I will hopefully have the link up tomorrow so I can share the whole segment, but for now I wanted to list out the products I talked about:

Here’s a still shot from the segment. I’ll get the link to you soon!

So I went a little overboard for my son’s 4th birthday party.  We had never thrown a party for him before and I’m never one to pass up a theme, so I went a little nuts. It was so much fun though and the party turned out great. Here a few ways I organized for the party beforehand and then I’ll share a few party pics because I can’t help myself! The theme for the party was Dr. Seuss so the possibilities were endless!

1) Lists, lists, lists – I love making lists and have a tendency to have too many flowing around. But I tried to streamline a little for the party so I could keep a handle on what tasks were left. First I made a spreadsheet and just did some brainstorming. I used separate tabs at the bottom of the sheet so I could split up my thoughts into categories: decorations, food, invite list, favor ideas, etc. Then as the party got closer, I used the Listo app on my ipad (recommended by Thea over at Time With Thea). This is such an efficient and easy app to use and I’m pretty much obsessed. On Listo, I had a list for Party Tasks and another one for my grocery list.

2) Assess  – I searched my house for what I already had and what I would need to buy. I wanted to do all of the decorations as cheaply as possible so there was a lot of DIY and a lot of Pinterest involved here. After I got a little creative with what I had, I bought or ordered the rest of the decorations, favors, etc. Most projects were a combination of purchasing and DIY. For example, I made Truffula Tree decorations for the kids table. To hold the trees, I used cans I had saved ( I told my husband I would use them someday!) and covered them with printed paper. I painted some cheap dowels and bought some small styrofoam pieces and round sponges from the dollar store. I ended up buying the feather boas from an online party store because it was cheaper. 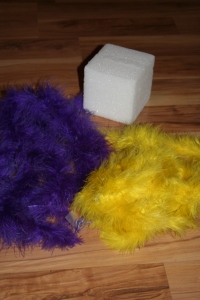 Here is the finished product! 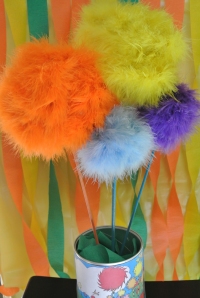 For the favor bags, we bought candy and a bag of little toys, but then I made a bookmark and activity book with coloring pages, connect the dots, etc. I laminated the bookmarks and put the favors in cheap plastic bags I bought at the dollar store. 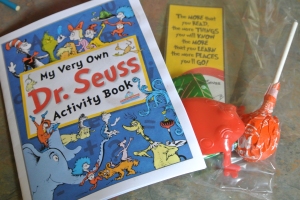 I also did a lot of other print outs to use as decorations, table signs, etc. I even made some cutouts for a little photo booth wall we had set up.

I laminated all of the signs because I knew they would hold up better, look nicer and could be reused. I happen to know of another upcoming Dr. Seuss party, so some of these can be passed on. And several are going in the scrapbook!

3) Recruit help – I had several people lending me chairs, tables and decorations so I picked up those things early in the week before the party. I even had to borrow a camera because mine broke with the party just several days away. I was so worried, but I ended up having 3 people offer to lend me cameras! I also had 2 friends agree to come early the day of the party to set up and do all of those last minute things. It was great to have the help. I never would have finished cutting out all my Dr. Seuss Lorax Mustaches without them! My friend Roni drew the Cat in the Hat for our ‘Pin the Hat on the Cat’ Game and Deb made an amazing cake!

3) Grocery Shop – I did a preliminary shopping trip a few weeks before hand to get all of the non perishable items and also all of the paper plates, plastic silverware, tablecloths, etc.  I wanted to get some of this stuff purchased so I didn’t have to get everything all at once right before the party. Then the day before the party was the big trip for the fruit and veggies, drinks, meats, etc. I normally don’t take my ipad to the grocery store with me, but in this case it was perfect. I usually categorize my grocery list by store section so it’s easy to shop. But for the party, I was just jotting down items as they came to me so the list was all out of order. With the Listo app, you can cross off items and they automatically move to the bottom of the list. It was a really easy way to shop actually. If I had an iphone, that would make more sense to do on a regular basis, but for now I don’t have one.

4) Set up – Party set up was going on the whole week as I slowly transformed our house into Seussville. I knew that if I waited until the day of the party, I would be a frantic mess. So I did a little each day and crossed items off my list a bit at a time. I tried to get decorations up, chop veggies, and make a list of items I realized I had missed in my previous 400 lists.

5) Let it go – This was the most important for me. Even with all of the planning, there were still many things I didn’t get done that I originally wanted to do. I didn’t have a cute sign on my front door, I didn’t finish the backdrop behind the drink table, I didn’t make signs for all of the snacks. And the list goes on. But no one came in and asked me where my front door sign was. And no one came up to me with a confused look on their face because the pretzels weren’t labeled with a cute Dr. Seuss inspired name. And no one left the party because there wasn’t a decorative backdrop behind the drinks. In the end, the party went great because I focused on my 4 year old boy and all of his friends at the party.

If you want to see my crazy Pinspiration board for this party, take a look-see here.

And here a few pics from our party: 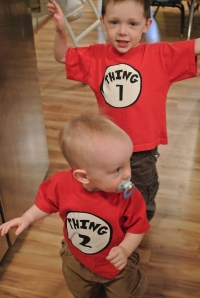 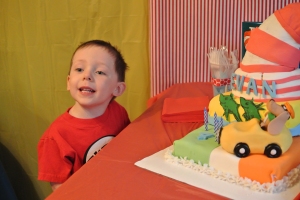 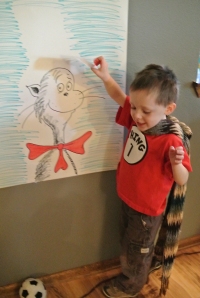 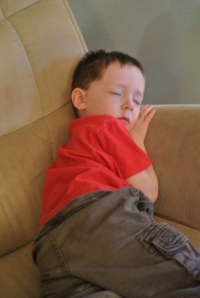 Hi everyone! So I have been off the blogging grid for over a week and it was completely unintentional. The main reason is that I have decided to switch my blog over to a self hosted ‘wordpress.org’ site and for some reason, I CANNOT figure it out. I have been putting all of my energy into some behind the scenes website stuff, but that doesn’t make for very interesting blog reading, does it?

I have also been working like a crazy lady planning a birthday party for our soon to be 4 year old. We have never done a party for him before and I think I may be going ridiculously over the top. I think Pinterest has finally gotten the best of me……

There are a few other things filling in my spring time business, so some things have fallen by the wayside…..ie my overly planned blog posts. I just haven’t had the time to commit my full 4 hours of staring at the computer not knowing what to say. Of course this absence comes right after Neaten Your Nest’s 1 year anniversary. Shame on me!!! But I promise I am working diligently to make the site better, easier to navigate, more engaging and with additional features. Don’t forget about me!

My name is Erin and I am passionate about creating an organized, balanced and comfortable home for my family. My husband and I live in Colorado with our two kids, 3 dogs, and the chaos that ensues from having all of the above! Organization and clarity are so important because of our hectic life. I want to help others organize their lives, finances, health and goals so that they can live the best life possible. To me, living the best life is about streamlining all the things you have to do so you have time and energy for the things you want to do. It's time to make life easier so you can make the most of life! It's time to Neaten Your Nest! ~Erin